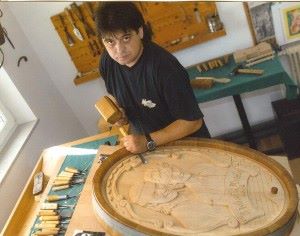 Josef Fuchs creates everything from baby cradles to grave crosses with his professional carving. He has however specialised in creating portraits on wooden trenchers and wine barrels. He now exports these worldwide.

When Josef Fuchs waves his sharp knives in a stranger's face no blood flows. Instead, wood shavings fly. Fuchs portrays people; not on canvas or paper, but on wood. He began close to ten years ago, quite by accident. Colleagues from the St. Peter on Ottersbach's brass band asked the skilled barrel-maker to carve a flugelhorn player as a wedding present. Without using a template, Fuchs produced a carving with a likeness so similar to the bride that he realised he could specialise in carving portraits. His decision was made easier due to the fact that through the increased usage of metal barrels, the need for wooden barrels was quickly decreasing. He did however stay partly true to his original profession by not only using wooden trenchers, but also small 2.5 litre barrels for his woodwork. The wood comes from local timber mills and the blank barrels from his barrel-maker colleague Johann Hütter. They are both happy with the arrangement: „This way he gets something from it and so do I.“ Fuchs needs 25 to 30 working hours to carve one of his trencher portraits, which then cost around 295 euros each. A good eye for the right proportions is necessary. „Mistakes are not allowed,“ Fuchs says, underpinning the finality of his „facial surgery.“ Photos serve as a template. The majority of his business comes from presents for anniversaries, birthdays, weddings and other family festivities. „These include a lot of romantic motifs, but if its what the people want…“ explains Fuchs, showing that he is willing to fulfill customer's desires, whatever they may be. Apart from people's faces, he has also immortalised combine harvesters, lorries, televisions, racing cars and deceased pets in his wood work. Approximately 50 carvings a year leave his 50 square meter idyllic workshop, which is situated between a fruit plantation and meadow in Wiersdorf by St. Peter on Ottersbach.. Fuchs took over the one-man enterprise from his father and photos remind him of the times after the Second World War, when their wooden barrels were transported by train to Russia to deliver relief and aid to those in need. Other countries are now on the export list of the son. Fuch's portraits have already found their way to Germany, Brasil, America and Switzerland. „I am fully booked up for four months.“ Fuchs can however be glad for a full order book. An important factor for his increase in renown is due to an appearance on Harry Prünsters TV show. A TV viewer of Munich, who works as a bodyguard for the animal trainer stars Siegfried and Roy, was made aware of Fuch's portraits and ordered a corresponding carving for his bosses in Las Vegas. Fuchs has also immortalised Freddy Quinn, Patrick Lindner and the female governor of Styria (Austria) in lime wood, with such an amazing attention to detail you can't fail to be impressed.